Drying wood in a vacuum bag 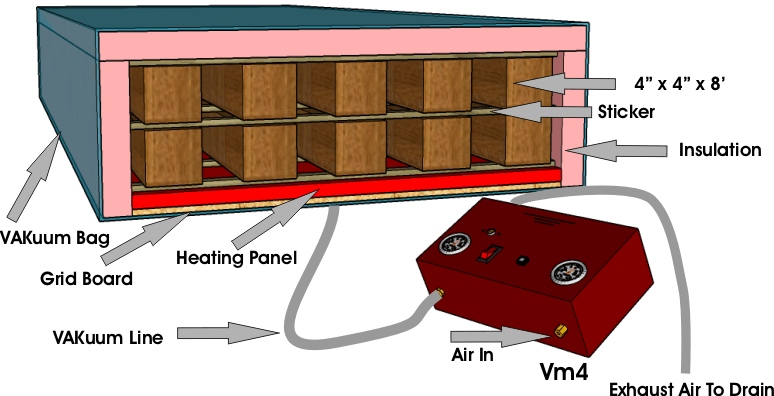 My first experience with VKD was about 20 years ago. The studio next to my shop had several ash logs (8”x10”x6’) that had been air drying for a few years. I had an inexpensive moisture meter that only read up to 30% moisture content (MC). The reading was above 30% MC.

We decided to try VKD in a vacuum bag using an electric vacuum pump (big mistake) and an electric blanket. What we did was to wrap the log in plastic mesh, so that moisture coming out of the log could travel to the vacuum connector. Then slide the log into the bag. The bag connector was placed on the end of the bag so that it was against the end of the log. We assumed the moisture would come out of the end grain more so than the side or face grain.

Next we wrapped the bag with an electric blanket and then another wool blanket to retain the heat. I used a common outdoor thermometer to check the temperature. The shop was about 65 °F. The temperature under the blanket stayed at a fairly constant 100 °F. We started the pump in which I installed a small tank between the bag and the pump with the intention of collecting the moisture. When the log got warm, the water started pouring out, it would condense in the plastic hose and drain into the tank. We let it run for 4 or 5 hours and shut it off at night.

Using the electric pump was not a good idea unless you go thru the trouble and expense to keep the moisture from the pump. The next morning, the pump did not start. What happened was the moisture contained sap and or resin that deposited on the inside of the pump walls and some rust occurred also. Since the vanes (rotary vane pump) have .0002” clearance from the side walls, they stuck and the pump could not spin. The good news is that with some cleaner and steel wool, the walls were cleaned and the pump was OK. Using our air-powered venturi pumps is a better option if you have an air compressor.

What we were looking for proved out. We could dry wood a vacuum bag. In my opinion, this was a crude method. It proved that the moisture could be driven out with vacuum and heat. Our pump went to about 27”Hg and if you go to https://www.engineersedge.com/H2o_boil_pressure.htm you will see that water boils at about 105 °F, instead of the normal 212 °F at this vacuum level. From what I have learned and read, VKD involves; temperature, vacuum level and time. These all vary depending of the species of wood be dried, thickness, grade and initial moisture content.

My next experience was with a customer who did some research on VKD.

He had wet lumber available from a local yard at reasonable prices, thus the desire to dry lumber. He went at it in a scientific manner as he had done some research before calling me. Again, this was years ago and I can’t remember all the details, however, I do remember that he was very happy with the results as he dried a load in about 5 or 6 days, running the system for 15 hours a day.

He purchased our smallest VP2 manual Venturi VAK Pump. It uses 2 CFM of compressed at 85 psi and has a vacuum flow (volume of vacuum air it can pull) of 1.6 CFM. It reaches 27”Hg (inches of mercury) maximum.

To make the VAKuum Kiln from a bag, he purchased a 52” x 10’6” x .020” polyurethane bag. For his heat source, he purchased a 3x8’radiant heat ceiling panel and laid it on his 3’ x10’ grid board. It was controlled initially with a light dimmer switch. The 52” x 10’6” bag allowed him to stack wood about 8 to 10” high inside the bag. He created sides and a top inside the bag with closed cell foam, this allowed the bag to press against foam rather than against wood. You don’t want rough wood pressing against the bag as splinters could puncture the bag.

He put a temperature probe inside the bag, not sure how. Probably thru the vacuum connector. He had a drying schedule for the species of wood and he regulated the vacuum level and heat manually. For example, if it called for 22”Hg at 120 °F for 5 hours, he regulated the manual Venturi with the air pressure. It is designed to achieve 27” Hg at 85 psi, thus, if he wanted 22”Hg he just turned the air pressure down until the gauge read 22”Hg. The dimmer switch was used to manually regulated the heat panel. Since he only let it run for 15 hours each day, I believe that he rotated the stock, several times, to get more even drying. He roughly followed the drying schedule and after 5 or 6 days he was very satisfied with the results.

For his second pass, he purchased our VM4 (automatic air-powered system using 4 cfm of compressed air) and we modified it so the air exhaust exited outside the control box. Normally the air exits the Venturi VAK Pump inside the metal box and air filters out thru the various cut outs for gauges, brass fittings, etc. Water flowing thru the Venturi VAK Pump does not hurt it, it will sputter when the water and air mix, however, it gets ejected out the exhaust. We cut an additional hole in the box and extended the exhaust out with vinyl hose that went into a bucket to catch the water.

My whole purpose of the application note is to see if there is interest in developing VKD with our equipment. We can do modifications to the bag or VAK Pumps for those of you that have new ideas and would like to try VKD on your own.
Quality VAKuum Products, Inc.
74 Apsley Street Hudson, MA 01749